Posted on December 4, 2011 by chrismeadsphoto

As i have said before i have followed cycling for some 40 odd years and for most of this time have had to watch other cycling nations take all the prizes whilst we in this country have had at best one or two pros at the top table getting the odd win here and there. Think Paul Sherwen and Graham Jones, Robert Millar and Sean Yates, Chris Boardman and Max (I’m from Derby mi duck) Sciandri, David Millar and well just David Millar. Anyway the unthinkable has happened in recent years and we Brits have not only got to the top table we have shoved the French and Belgians off it and sent them to the bar for us! Now we have arrived though it is important that they stay there and year on year grow in numbers and to keep getting the victories. Because we were starved of success for so long every UK rider in a top team and at a top race is like a precious stone to be treasured (jeez that sounded pretentious!)
So over the last week or so two particular riders have had mixed fortunes that i just need to speak about.
Firstly Jonny Bellis.He emerged on the pro scene three years ago with Saxo Bank after a very successful junior career. The world was at his feet but unfortunately during his first season he was knocked from his scooter and this compounded with an hospital infection (nice to know the Italians are competant at giving out these and its not just us) has struggled to recover from what has been a life threatening set back. He was released this Autumn from his contract at Saxo Bank which i’m sure Bjarne Riis did reluctantly but he does have a business to run. He has however managed to get a berth on the An Post Sean Kelly squad who recognise his class and are prepared to invest time into his full rehabilitation. Nice one Jonny and good luck in getting back to your best.
On the other hand a solid and classy British pro, Daniel Lloyd, has been given the heave ho from Garmin Cervelo and with the lack of any openings for next year looks set to retire. This is a real shame as he really is one of the good guys. He won’t lower his sights and settle for a career in a domestic team as he feels that at thirty he has a better chance of getting a “proper” job than hanging on for another 4 or 5 years. Fair play to him and all the best for the future- wherever that may lie 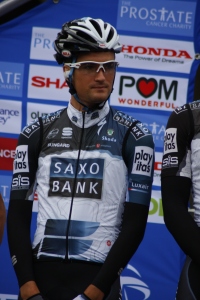 I am professional cycle sport photographer based in the North West of England. I get to as many good quality races as I am able with the aim of shooting the action and the actioneers! All photos in my blog are, unless otherwise stated, my own handiwork. All vids are to the credit of others.
View all posts by chrismeadsphoto →
This entry was posted in Uncategorized and tagged cycling "cycle sport" "cycle racing" "jonny bellis" "daniel lloyd" "saxo bank" "an post sean kelly" "garmin cervelo". Bookmark the permalink.