Posted on March 6, 2017 by chrismeadsphoto

Anyone waking up to a dry and bright Sunday morning could have easily been forgiven for assuming that the weather forecast was completely wrong in its prediction of heavy rain. This state of affairs wasn’t to last too long however and by 10:00am the aforementioned rain had arrived in Biblical proportions.

Pimbo Industrial Estate was the rather unglamorous location for Sunsport Velos first race of 2017 the Cull Cup and Duncan Sparrow Road Races. Nestled in Skelmersdale in West Lancashire this insalubrious venue was about to play host to an epic women’s race completely shaped by the weather and animated by a bunch of tough as nails racers who gave their all in the quest for early season glory.

Meeting an hour before the midday start the seven riders for Sunsport tried in vain to keep warm and dry in their vehicles but inevitably they would have to emerge to undergo their pre race turbo warm up. Luckily the teams gazebos did provide a modicum of shelter although the futility of this would be exposed once they set off for the start line.

Tactics had been drawn up beforehand but the conditions and the sensible decision by the commissaires to shorten the race to just 10 laps from the original 22 meant that a last minute recalibration was needed. 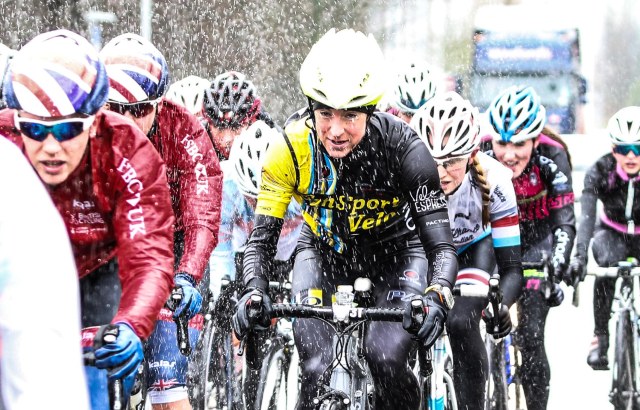 Seonaid Thompson versus the elements

The race set off at a more than steady speed, the riders appearing eager to get things done and dusted as soon as possible, and the good pace, which lasted throughout prevented any meaningful break getting away. Lap after lap the bunch passed by in close formation, the protagonists at the front changing places but gaining no meaningful ground. Sunsport were animated within the bunch, always searching for opportunities and countering rivals doing likewise.Inevitably however a bunch sprint ensued on the steady uphill drag of Peel Road with Emily  Nelson of Team Breeze taking the honours from her team mate Manon Lloyd.The Sunsport girls had ridden faultlessly, showing tremendous teamwork and youngster Felicity Gledhill led out Lizzy Banks to contest the sprint in which she bravely battled to a highly creditable fifth place.

Seonaid Thompson had succumbed to the conditions towards the end of the race but otherwise a full complement of Sunsport riders crossed the line in close order to the winner and as first races as a team goes this was a great success.

There were some very wet and exhausted riders come the finish but the general feeling was of immense satisfaction of a job well done.

Lessons will be learnt (although they will be unlucky if they encounter this type of extreme weather again all season) and plans will be tweaked and all things being equal the team will be climbing onto a podium in the near future.

Sunsport Velo at the Head of Affairs

Lizzy Banks provided her own first hand account of the race:

“First, let’s set the scene. We’re on an industrial estate on the outskirts of Skelmersdale in early March, it’s grey, it’s 3 degrees and the horizontal rain that is pouring down and flooding the road is doing its best to attempt to turn to snow! Welcome to Pimbo!

This afternoon was the first race as a team for the ladies in yellow at Sunsport Velo WRT. We had 7 out of the 8 team members riding today as Vicki was out in South Africa having a really tough time in the sunshine (note how none of us are even a tiny bit jealous)! Today was also the first opportunity for the riders to get racing on their brand new Cervelo team bikes.

On the start line the riders were informed that the race had been shortened from 22 laps to only 10 meaning the race would end up being just short of an hour, instead of two. In hindsight, although initially disappointing, this was the right decision for the commissaries to make as the freezing conditions really took their toll on the riders. Changing gear became impossible without looking at the shifter to see what your seemingly detached hand was up to and there was no chance of getting in the back pocket to take a gel!

Because of the shortened race, the agreed team tactics immediately went out the window and it was a case of thinking on one’s feet! More than anything, this race was a great opportunity to get the majority of the team together to practice communication and working together in the bunch before the target races of the season creep upon us. Every race is a learning curve, no matter how experienced you are, and today was a good opportunity to learn lessons which can be built upon as well as recognising what we did well and taking a lot of positives away from the race.

The race was animated by a particularly dominant Team Breeze but the Sunsport Velo WRT riders were always quick to respond and both neutralise attacks as well and make attempts to set up breaks. It was also great to see the riders confidently moving around in the bunch, working together to bring riders to the front when needed and communicating well. As we expected the race came down to a bunch sprint into a vicious headwind where I managed to grab fifth place in the sprint.

We are looking forward to next weekend where the team will be racing the first round of the team series at Hog Hill in Redbridge.” 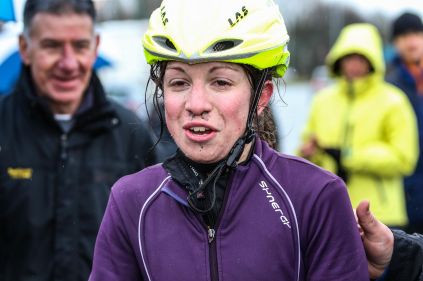